For our second styling challenge, Cubism art inspired. This is me and my mentor Markski Glom made from different ideas.


For today’s Styling Challenge, Cubism inspired; I’ve decided to be living art. I've chosen Picasso's Woman with a Flower to be the highlight of my outfit. In 1927, Picasso began an affair with seventeen-year old Marie-Thérèse Walter, his son Paolo's nurse. Much of his work after 1927 is fantastic and visionary in character. His Woman with Flower (1932) is a portrait of Marie-Thérèse. Its movement is cubism which is a
20th century avant-garde art movement, pioneered by Pablo Picasso and Georges Braque.
First of all, we were all born, because of a woman; our mothers carried us in their wombs for 9 months and had to endure the pains of giving birth, so simply we wouldn’t be here now without them. A woman’s most common responsibility would be to take care of her family, may it be to serve them, or to work for them. As you know, the overwhelming majority of child-rearing and household tasks are performed by women. The sad truth though is that there are a lot of cases where in they have been brutally abused, so with Picasso’s masterpiece, Woman with a flower (1932), I would like to remind everyone of the importance of women to us men and the world.
The whole outfit inspired by  two-dimensional areas of color, boldly and sweepingly outlined… are juxtaposed with similar areas that bear witness to a modelling, three-dimensionalizing instinct... Again The Woman with a Flower. Thank you. 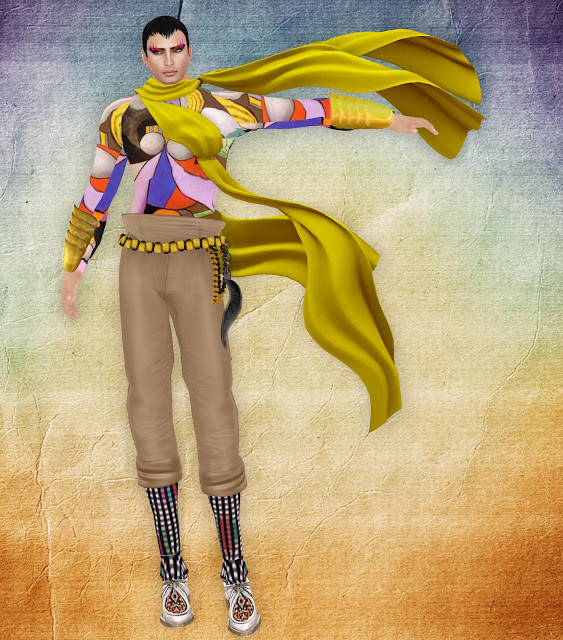 Hello everyone, this is eLJhay Denver. I am your boy next door that will be posting old, new releases, sales, group gifts and hunt items for everyone's pleasure and to help you all with Secondlife. :)
To all creators/designers who wants to be blogged here may contact me in world.
Or better message me in facebook: https://www.facebook.com/eljhay.castillo
Or e-mail me at: Altair_Lover@yahoo.com
Have a great day everyone! Enjoy reading! :)